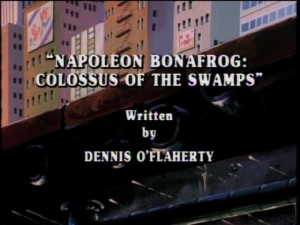 NAPOLEON BONAFROG: COLOSSUS OF THE SWAMPS

While Krang hires some local hoods to drill for anti-freeze (in an effort to free the Technodrome from the frozen Arctic), he sends Shredder, Rocksteady and Bebop down to the Louisiana Swamps in search of the Mutagen Pool. Shredder’s mission is to extract said mutagen with the Mutagen Shooter to use against the Turtles.

Napoleon Bonafrog contacts the Turtles when he sees Shredder and crew patrolling the swamps and then inadvertently is blasted by the Mutagen Shooter when Rocksteady trips over a root, causing him to mutate into a mean giant frog. Shredder uses this to his advantage and returns to the City with his new “slave” in tow.

In the sewers, Napoleon reluctantly leads Shredder, Rocksteady and Bebop in the Turtles’ lair. But before he is close enough, the mutagen wears off and he reverts back to his normal size and warns the Turtles off. Shredder zaps him again, causing him to mutate yet again. Shredder orders Napolean to destroy the Turtles. Giant Napoleon refuses and runs away.

Meanwhile, Big Louie realizes that the diamond used to pay him off for his delivery of the anti-freeze is not the Star of Hoboken — in fact, it is nothing more than glass. The mobster is angry and he wants the real diamond. Big L drives all over town searching for Shredder when he stumbles upon Napoleon (who he had “met” during the payoff and who has shrunken back down to his normal size), who he now holds for ransom until Shredder makes good on their deal.

Back at Big Louie’s hideout, with Shredder and the Turtles hot on their tail, Napoleon reverts back to his mutated size — and once again he is very angry and refuses to obey the Shredder. But Shredder zaps him again with the Mutagen Shooter and once again, Napolean is under The Shredder’s spell. They take Donatello prisoner and return to Shredder’s secret hideout.

Shredder is very upset that Krang’s Mutagen Shooter is defective and forces Donatello to fix it or otherwise he will launch his heat-seeking missiles against the other three Turtles. Donatello agrees but ends up crossing the wires causing it to have no affect on him and reverting Napoleon back to his original size.

The Shredder launches his heat-seeking missiles anyway, failing to realize that turtles and frogs are cold blooded. He barely escapes with his life.