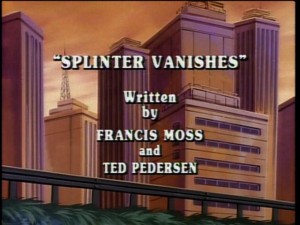 The Turtles enter Master Splinter’s room and find him and his belongings gone. Looking around, the TMNT find a videotape that he left behind for them. In the tape Splinter explains to the Turtles that he has taught them all he knows and now it is time for them to be on their own. The Sensei tells them to leave the lair and go their separate ways. The Turtles take his advice and leave the lair. Michaelangelo gets his own cooking show, Leonardo works at a fitness center, Raphael performs at birthday parties and Donatello works in a fix-it shop.

In the sewer, the Rat King finds out that the Turtles have separated and realizes that now he and Leatherhead can take over the city. They plan on creating an army of Robo Rats and Android Alligators to help them in their evil endeavor. Even though the Turtles have gone their separate ways, Leatherhead still wants to find them and get rid of them once and for all. One by one the villains attack the solo Turtles and capture all but Leonardo. While Leatherhead and Leonardo are fighting, Leonardo falls into a sewage drain. Leatherhead thinks Leo is dead and does not bother to go after him.

While looking for Michaelangelo, April discovers that the Rat King and Leatherhead are after the Turtles. April encounters Leatherhead and follows him to the hideout where she sees Michaelangelo, Donatello and Raphael tied up. She is discovered, and almost caught, until Splinter rescues her. The Master had been following April without her knowledge to see how each Turtle was doing.

To the villains’ surprise, Leonardo arrives and frees the other Turtles. The Rat King and Leatherhead send the Robo Rats and Android Alligators after them. April and Splinter arrive shortly after. With the Turtles reunited and Splinter by their side, they defeat the robots. Seeing that their plans have been ruined, the Rat King and Leatherhead flee.

Splinter tells the Turtles that the reason he left them was because he sensed trouble from the Rat King and Leatherhead. He figured that if he could trick them into believing that the Turtles had gone their separate ways, it would bring the villains out into the open. The plan worked just as he imagined it.