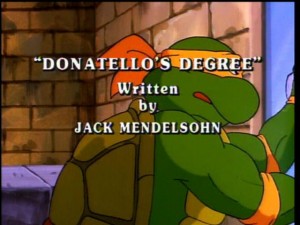 Donatello gets an invitation to accept his degree personally from Professor Sopho at Sopho University. The only problem is that the invitation is addressed to a Miss Donna Tello. Donatello asks Irma to go in his place while he accompanies her in a hidden trunk. While Irma gets a tour of the University, Donatello decides to have a look around the college. He discovers that Professor Sopho has built a device to speed up the Earth’s rotation. Sopho is plannig on using the machine to fling everything from the Earth’s surface into space. The Professor’s body guards catch Don-san snooping around, but, he manages to get away.

Meanwhile, Michaelangelo’s fish, Maxwell, escapes and jumps into the sewer. Raphael, Leonardo and Michaelangelo jump in after the fleeing fish. The Turtles end up following Max all the way to Bottomless Lake. There, they see April with Vernon doing a story on the Lake. Mr. Thompson contacts April and tells her to head over to Sopho University so she can tape an announcement being made to the world by Professor Sopho.

Back at the University, Donatello tries to warn Irma about Sopho’s plans, but she does not believe him. He runs into the body guards again but this time he’s not able to escape. At the graduation ceremony, Irma discovers that the Professor’s plans are exactly as Donny described, and she runs away from the whacked Prof. She finds Donatello tied up, but is not able to free him. The Professor starts to follow through with his plan and the Earth starts rotating rapidly, changing it from night to day to night.

Michaelangelo, Raphael and Leonardo go in the University to find Donatello. Using one of Irma’s hair pins, they are able to stop the magnetometer from spinning. Michaelangelo ends up catching Maxwell and Professor Sopho and his body guards get arrested and locked up.