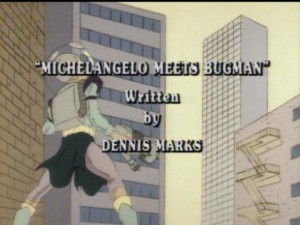 Michaelangelo avidly reads a comic book which features his favorite superhero, Bugman, a half man, half insect fighter who battles for truth and justice. While reading one of the comic books, Mikey hears a cry for help in the sewer. To his surprise, Michaelangelo rescues Brick Bradley (Bugman in his human state). One of his enemies, Electrozapper, tied him with chains made of Leestanite, which affects Bugman as Kryptonite harms Superman. After hearing what happened to Bugman, Michaelangelo decides to go with him to fight Electrozapper. He leaves a note for the other Turtles telling them where he has gone.

When the Turtles find Michaelangelo’s note, they begin to laugh, thinking that it’s one of his practical jokes.

At the lair, the Turtles begin to wonder if maybe Michaelangelo was serious about going with Bugman. They decide to go out looking for him. They arrive at the power plant in time to rescue April from a fire.