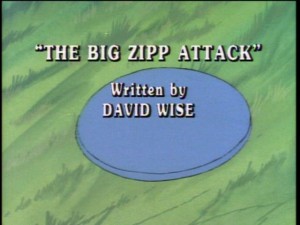 As Krang is about to send Shredder, Bebop and Rocksteady to Earth to find a rare metal, Rigidium, to repair the Technodrome, a meteorite lands containing a large egg. The egg hatches, revealing a Zipp, a cute little creature that begins to eat the Technodrome. Krang sends the Zipp to Earth hoping to distract the Turtles while Shredder, Bebop and Rocksteady locate some Rigidium.

The Turtles find the Zipp in the sewer and bring it back to their lair. Soon, the Zipp begins eating everything in sight and they discover that when it eats copper it doubles. The Turtles are soon faced with a small army of Zipps munching on the city.

Meanwhile, Shredder has tracked down some Rigidium, which happens to be the central core of the Lofty Tower. April and Irma are there doing a story on its grand opening when Shredder, Bebop and Rocksteady show up.

While the Turtles are following the Zipps around they discover that the Zipps like chocolate. When they consume it, two Zipps turn into one. Also, while Michaelangelo is in the museum, he sees a Zipp disappear while inside a mineral case. The Turtles discover that the mineral happens to be Rigidium, one of the rarest metals on Earth.

Using an oversized chocolate bar from a chocolate factory, the Turtles lure all the Zipps into it. When they finally finish the bar, all the Zipps come together making one big giant Zipp. After the big transformation of the Zipp, the Turtles try to figure out just where they are going to find enough Rigidium for him. Just at that time, Irma radios them from Lofty Tower telling them that Shredder is holding them hostage. He is trying to cut down a piece of Rigidium from the top of the tower. The Turtles and Zipp quickly rush there to stop Shredder before he has a chance to bring the Rigidium back to Dimension X. The Turtles give the rare metal to the Zipp and it shrinks back to its normal size. The little Zipp follows Shredder, Bebop and Rocksteady back to Dimension X, leaving Earth peaceful once again.