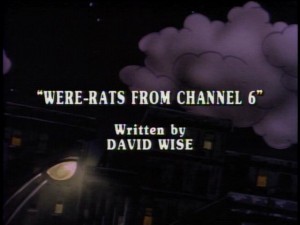 While the Rat King searches for food in the sewers, he comes across a canister of mutagen. Thinking that it is nothing, he throws it away and continues to search for food.

Rat King soon comes across Bebop and Rocksteady, who were accidentally transported to the sewers by Shredder. They are on Earth to meet two thieves that stole explosives for them. Shredder tells them that while they are in the sewer, they can search for a canister of mutagen that was lost there. The Rat King hears all this and realizes that the canister he threw away was the one with the mutagen in it. He figures he could use the mutagen to make human size rats that will help them get food.

While searching for subjects, he comes across Irma and Vernon, who are in the sewer working on a story. He captures them and using the mutagen, turns them into rats. Using his flute to put them under his power, he orders them to go to the surface and bring back food.

While searching for food for the Rat King, Irma and Vernon transform back to themselves. (The Rat King does not know it, but, the mutagen is unstable.) Not having any recollection of what happened, they return to Channel Six.

The Rat King goes to Channel Six after Irma and Vernon fail to return with food. Using his flute, they transform back into rats and capture April. While out searching for food, Vernon overhears where there is a lot of cheese and informs his master about it. Leaving April in his lair, the Rat King, Irma and Vernon head to the airport.