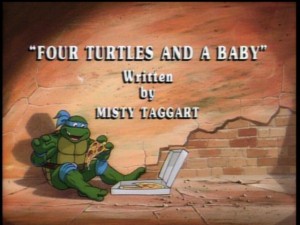 With their planet under attack by General Traag, Grizzla and Zenter, the Turtles Neutrino friends, decide to send their infant daughter Tribble to stay with the Turtles. No sooner do they send Tribble when Shredder appears and takes them captive.

The Turtles soon discover that Tribble has psychokinetic powers. Running out of ways to care for her, they ask April for her help.

Krang discovers that he can not conquer the Neutrinos as long as Tribble is free so he sends Shredder, Bebop and Rocksteady to find the infant.

After escaping from the Technodrome, Zenter and Gizzla come for Tribble. They tell the Turtles that once the Neutrino people heard of their leaders’ escape, they sent General Traag packing.