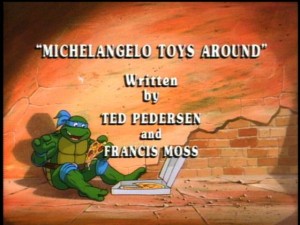 Michaelangelo, eager to go to a toy show, smuggles himself in as a Turtle toy. Wilbur Weazell, chief inventor of Tyler Toys, has reprogrammed Tyler Toy’s newest toy, the “Tyranno-toy” to attack and destroy. This would ruin his employer and allow Weazell to take over the company.

The Michaelangelo Toy is spotted by Mr. Tyler’s spoiled son, Kevin, and gets carried off to the Tyler estate for him. April, who is broadcasting from the show, sees Michaelangelo being taken away and quickly notifies the Turtles.

The Turtles go to the show to see if they can find out where Michaelangelo was taken. They run into Weazell and discover what he is planning to do with the toys. Weazell activates the Tyranno-Toys and they attack the Turtles. While battling the terrible toys the TMNT get caught in a net.

Meanwhile, Michaelangelo and Kevin are at the Tyler estate trying to escape from Weazell’s assistant. Weazell shows up at the estate and activiates more toys to deal with Mikey and Kevin.

The Turtles escape from the toy show and follow Weazell to the estate. Kevin and the Turtles battle it out with the toys and capture Weazell and his goons, stopping him from going through with his plan.