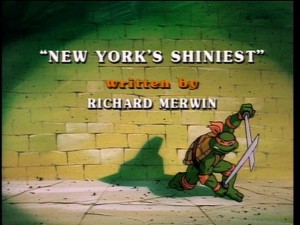 Shredder learns that the police have created a robotic cop and he plans to steal the android and make copies of it. April gets a tip about the new experimental cop, Rex-1, and breaks into the lab with her news camera for an exclusive story. When she activates the remote control device that commands Rex-1, she makes a friend for life. April leaves the lab, only to be followed by Rex-1, who informs her that she is his controller and the he is designed to serve and protect her.

April makes a report from the Turtles’ lair about the city’s plan to replace live cops with an army of robotic cops.

Meanwhile, Shredder decides to break into the police department computer and steal the plans to Rex-1. A short while later, as the Turtles are returning to their lair, they encounter Shredder’s new Robotic Army. Thinking that the Turtles have been destroyed, Shredder orders his robotic police force to loot the city, but once again they encounter the Turtles. During the fight, Rex-1 is disabled. Donatello manages to resurrect Rex-1 with various parts and reprogram it to control the clones.

The TMNT lure the nefarious ninja and his evil army of robots into a trap. This is easily accomplished by visiting a local carnival and setting off a fireworks display that lights up the skies with the image of the Turtles. At first it appears that Rex-1 is malfunctioning (thanks to the old Westerns, Three Stooges shorts, “The Wizard of Oz” and an exercise video tape that Donatello had used to reprogram him), but this is the very strategy that causes the Robotic Clones to short circuit. Thus another one of Shredder’s less-than-brilliant schemes goes up in flames.