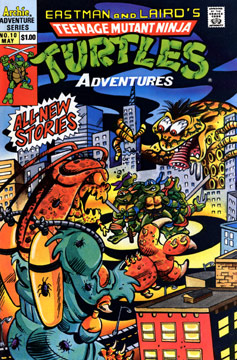 As this issue begins, we see Bebop and Rocksteady dumping toxic waste into the sewers, an act that seems to have caused something wicked to happen to a large planarian worm swimming in the tepid waters…

Cut to the sewer hideout of our favortie mutant turtles. Leo and the boys are having a discussion and they seek out Master Splinter’s advice. It seems that the recent events have deeply troubled our heroes and they’ve decided to stop being reactive to Krang’s evil deeds and try to do something proactive to stop him. The Sensei recommends that they start with their best lead to Krang… the Shredder himself!

Raph is dressed once again in the all-black wrestling costume that he wore in issue #7. Splinter inquires why Raphael is wearing a suit so different from his brothers’, and Raph explains that it will help him be stealthy in the dark. Splinter approves of this reasoning, much to Raph’s delight (and Leo’s disgust!)

Meanwhile, in the Shredder’s secret hideout, an extermintaor has arrived to get rid of Shredhead’s roach problem. Shredder leaves the man to his work and calls Krang on the vid screen. It seems that the vile little alien has something planned… he’s searching for something… and of course, Shredder wants in on the action!

By now, the TMNT have arrived where Shredder’s sub was hidden (issue #5)… except the vessel is now missing. The Turtles decide to head down a tunnel that has lead to Shredder before, and begin their trek… unaware that a hideous giant planarian worm mutant is following them! As the ninjas head down the pipe, they end up running headlong into a giant mutated roachman! It seems that the exterminator got exposed to the mutagen and has been turned into a monster… much like the planarian worm directly in front of him!

The monsters end up battling over who gets to kill the TMNT, and in their fight they break a gas line and a fuse box, causing a deadly combination of free-floating natural gas and electric sparks. The TMNT realize the danger, and quickly huddle together, using their back shells for protection against the impending…

The explosion seems to have destroyed the two battling beasties, and thankfully the Turtles’ shells saved them from harm. As they examine the debris, they notice that there are suddenly alotta rats around…