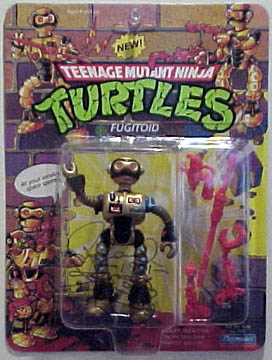 PORTRAIT OF FUGITOID
The Sleek Servo Servant!
VITAL FUGITISTICS:
Accessories: Electro-Stun Stick, Metal-melting Machine Gun, Grappling Claw, Skeletal Scanner
Birthplace: Peblak, on the Planet D’Hoonib
Weight: 200 lbs. (without rust)
Favortie Music: Heavy Metal
Favortie Drink: Oil
Nickname: Honeycutt
While tinkering with an unstable mental device, the infamous Dr. Honeycutt transferred his brain into his android servant – making him the world’s first and most sought after servo-scientist. Now a hunted hybrid humanoid, Honeycutt’s on the run. Officially classified as a Fugitoid, he bumped into the Turtles while trying to squeeze through a transdimensional portal and returned with them to earth.
Loyal to the end, Fugitoid assists the Turtles in developing new devices. He’s particularly fond of Donatello’s ingenuity. Fugitoid is skilled in many languages – from conversational cockroach to Mongolian mumble – but he’s best used as a super-scout for the Turtles. Armed with his grappling claw and skeletal servo-scanner, Fugitoid can get himself into unusual places. He’s an endless source of data, details and other dehumanized delights. Fugitoid. A good guy to run around with.
©1990 Playmates Toys