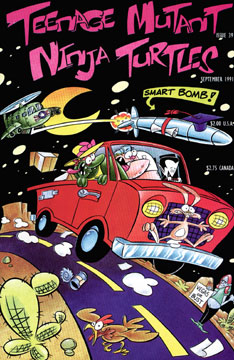 “Spaced Out!” Part 2
This story is continued from TMNT #38

The spacecraft crashlands on a farm, relatively unscathed. The aliens burst out of the ship, prepared to take over the world (one armed with a photon pistol, the other with a video camera). Raph eventually stumbles out of the ship, dazed and confused. Bessy the cow also emerges, and she is quickly romanced by the farm’s bull.

Meanwhile, the military has deciphered the exact location of the crash and sends its men to the scene.

Raphael grows weary of the aliens lame attempts to conquer the planet and smashes their camera in a fit of rage.

The local townsfolk hear of the crash and alien invasion at a town meeting. Everyone panics, but since they don’t have any cars to flee the area, they’re forced to mill about town.

Raphael decides to hitchhike back to Casey’s farm, so naturally he dons a dress and heels in the attempt to entice a local into giving him a ride. In no time at all, a pickup truck stops and Raph is on his way – but so are the aliens, as they decide to stowaway in the back of the vehicle.

Back at the crash site, the farmer, his wife and their dog go into the spaceship to investigate. Unfortunately for them, as they’re exiting the empty craft the Army arrives and mistakes them for the alien invaders… and thus the farmer and his kin are taken into captivity.

Meanwhile things are getting heated in the pick up truck – the driver is attempting to smooch Raphael! As Raph struggles with the huge trucker, the two aliens assume control of the truck… sending it careening out of control… right into the local downtown where everyone is milling about!

This story is concluded in TMNT #40