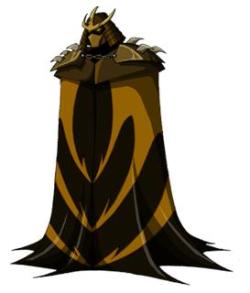 Hisomi-Shisho is a member of the Ninja Tribunal and the ninjutsu master of stealth. He is very fast, large, strong, but also no longer speaks as he embodies the three pillars of ninjutsu, stealth, secrecy and silence.

He prominently appeared during the fifth season of the 2003 animated series he also appeared in the Fast Forward episode The Journal and once more in Back to the Sewer during the wedding ofCasey Jones and April O’Neil.

Hisomi-Shisho was one of the original five dragons, and was requested along with his fellow ninja to defeat an attacking Tengu, and were given armor to protect themselves with when they attacked. When they challenged it, it was Oroku Saki who finally killed it.

However it soon became clear to the other four members that Saki had instead absorbed the Tengu’s black magic into himself, as he was slowly massing a Tengu army to take over Japan. The Tribunal knew with the black magic multiplied by the arts taught to him through the Tribunal, they could never defeat their former friend. Therefore, they left Japan and traveled the world and consulted the greatest ninja masters on the earth at that time.

Finally, they returned to Japan, and found that their training had bonded them with nature itself. They found their new abilities enough to defeat Saki, and launched an attack on him, defeating only by attacking through their symbolic avatars, them being dragons. Knowing Saki’s magic was so great that he could never truly be destroyed, they locked him in a casket and separated his power sources – Saki’s gauntlet, helmet and body. If they were to come together, Saki would once again live.

Training of the Acolytes

Leonardo, Joi, Donatello, Raphael, Faraji, Tora, Michelangelo, andAdam were eight of the greatest ninja on earth, and were chosen by the Tribunal to be the newest acolytes to be trained. Hisomi and his fellow acolyte members tested the eight by dressing in their armor and commanding each to fight each other, with them passing. Hisomi then began to teach the eight the way of invisibility, but took it to a much higher level then Splinter had.

Hisomi and the rest of the Tribunal later faked an attack by theFoot Mystics and used his tricks to look as if he were captured, as a test to the acolytes. He and the other members were not pleased at the acolytes progress, for they had been horribly defeated. They forced the acolytes to train harder.

The acolytes were at one point instructed to cross the Dragon Bridge without being heard. With Michelangelo being the first to be tested, the turtle failed the test, and a dragon erupted from the chasm below to attack him, but Hisomi stopped and calmed it.

Later, the eight were instructed to run as fast as Hisomi, who was using his bond with nature to run faster than any normal human being. Michelangelo redeemed himself when he used his Amulet of the Acolyte to speed as fast as Hisomi, explaining his speed to Hisomi with only a shrug and a smile.

When the temple of the Tribunal was infiltrated by the Foot Mystics, Hisomi was unaware that Splinter and theAncient One were really Mystics in disguise, and escorted they and the acolytes to the casket in order to protect it. Immediately upon seeing the casket, the two Mystics seemingly killed Hisomi and the four human acolytes. The rest of the Tribunal appeared dead shortly after. The Mystics quickly went to New York, for that was where the current Shredder, Karai, resided as well as its being the location of the three keystones.

When the turtles’ amulets shattered and formed into Splinter’s greatest love, Hamato Yoshi, who appeared and killed Oroku Saki. Hisomi and the other Tribunal members appeared and informed a trick of the mind was all that was used to make it seem as if they had been killed, and invited the Ancient One to join the Ninja Tribunal, who accepted the offer.

Hisomi and the other members of the Tribunal were invited to the wedding of Casey Jones and April O’Neil. Cyber Shredder attacked and destroyed the farmhouse the wedding was to take place in. Serling and Donatello finally destroyed Cyber Shredder, however, and the wedding continued. Hisomi-Shisho didn’t particularly like Gennosuketrying to write his name over his present.