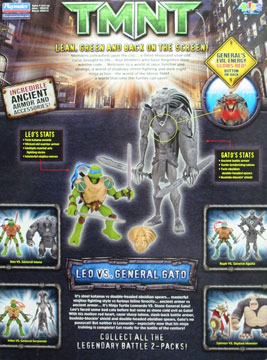 Monsters unleashed upon the city… a three-thousand-year-old curse brought to life… four brothers who have forgotten their warrior code… Welcome to a world at once familiar and strange, a world of shadowy street fighting and dark night ninja action – the world of the Movie TMNT – a world that only the Turtles can save!

It’s steel katanas vs double-headed obsidian spears… masterful ninjitsu fighting style vs furious feline ferocity… ancient armor vs ancient armor… it’s Ninja Turtle Leonardo VS. Stone General Gato! Leo’s faced some bad cat’s before but none as stone cold evil as Gato! With his molten red heart, razor sharp talons, slash-back battle armor, bushido-blockin’ shield and double-headed obsidian spears, Gato’s no pussycat! But neither is Leonardo – especially now that his ninja training is complete! Get ready for the battle of the century!