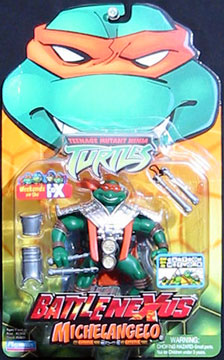 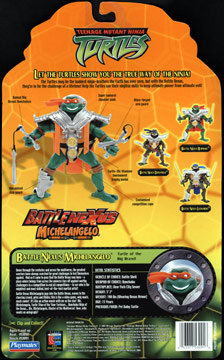 Down through the centuries and across the multiverse, the greatest warriors have always searched for great challenges to test themselves against. And so it came to pass that the Battle Nexus was born – a place where beings from across the universe face off against worthy challengers in a competition to end all competitions – to see who is the mightiest and most skilled, best-of-the-best martial artist!

Battle Nexus Michelangelo jogs into the Battle Nexus, waves to the cheering crowd, grins and thinks: this is like a video game, only much, much cooler! It’s like an action movie with me as the star! Me, Michelangelo, Turtle Titan of the Time Tortoise… Nunchaku Ninja of the Nexus… Me, Michelangelo, Master of the Multiverse! Now, who wants an autograph?