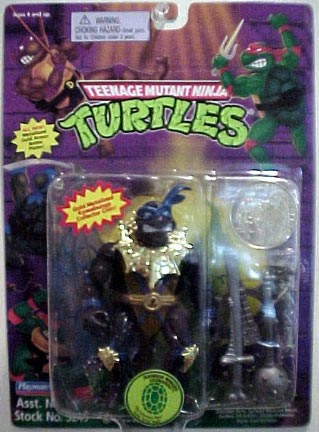 And so it came to pass that the world’s balance of power had shifted due to the displacement of the secret Mutant treasure – the Metallized Kowabunga Coins. Warrior Bebop and Warrior Rocksteady scattered the Coins, knowing they would create a pro-Foot flux – and that’s just what happened. Now, Warrior Winged Leonardo along with Warrior Winged Donatello, fight for all that is wrong! Allied with the Foot, our Warrior Winged Turtles turn their fighting skills against Warrior Metalhead Michaelangelo, who is the lone voice of truth. Don’t even ask what happened to Raphael. Let’s just say that pizza won’t be part of the picture for awhile until all the Metallized Kowabunga Coins are reunited and balance can be restored. Unfortunately, the Warrior Winged Turtles still have the fighting finesse of true Ninja Turtles. Wielding their weapons of ultimate Turtle terror, and protected with their metallized battle plates, these Turtle terrors power-pound dents into Warrior Metalhead Michaelangelo with their mighty sewer spiked clobber clubs. It’s a metallic battle face-off finale when the Warrior Winged Turtles challenge Warrior Metalhead Michaelangelo, bad boy battle weapons in hand and victory is just a swingin’ slice away!