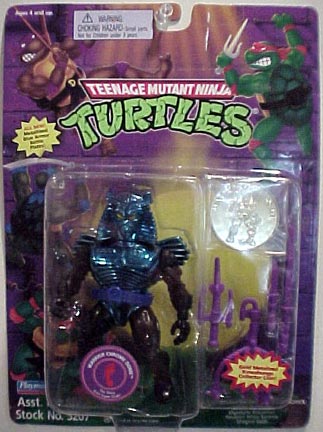 And so it came to pass that the world’s balance of power had shifted due to the displacement of the secret Mutant treasure – the Metallized Kowabunga Coins. Shredder’s evil-deed doers were dispatched to scatter the Coins, knowing they would create a pro-Foot flux – and that’s just what happened. To ensure the success of this maniacal plan, the ultimate steel soldier was released. Warrior Chrome Dome, better known as Shredder’s synthetic soldier o’ doom, set out to fulfill his one and only order – kill all Turtles! Drawing his silicon servo sai, gigobyte goupilion and neutron Ninja swords from his mega-metallic atomic arsenal, this robotic ruffian is the ultimate shogun warrior! The world’s only hope rests with Warrior Metalhead Michaelangelo, the only Turtle who hasn’t been woed to evil by Shredder’s dark Mutant mind-alterin’ brain-washin’. It’s up to Warrior Metalhead Michaelangelo to reunite the Metallized Kowabunga Coins and restore the balance. It’s the ultimate metallized Mutant face-off – Warrior Chrome Dome – the chrome computerized mad monster versus Warrior Metalhead Michaelangelo – the new massive Mutant metallic green Turtle power. May the strongest alloy win!