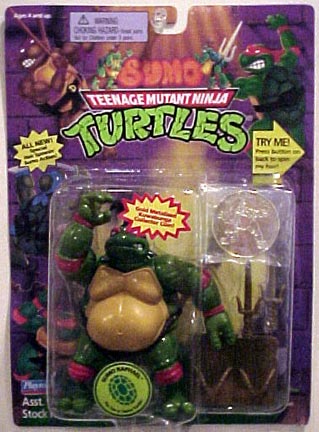 He’s large and in charge – he’s Sumo Raphael – and weight is on his humongous side. With each flap of his thunderous thighs, Sumo Raphael crushes anyone who gets in his way at meal time – and we mean CRUSH! We’re talkin’ a ton o’ Turtle power behind every blow of this mound o’ Mutant. Sumo Raphael is one large lad who packs more than just a punch: he also uses his special Sumo hair-spinnin’ technique to whip the Foot into shape. Bowlin’ over the bad guys and sittin’ on the Foot are just some of Sumo Raphael’s Sumo skills. And his sumo sai is always ready to skewer the skinny and filet the fat. All this action works up an awfully big appetite, so Sumo Raphael often calls on his bulgin’ brother, Sumo Michaelangelo. Together these boss big boys stomp and flatten the Foot ’til it’s time to eat. So as long as there are pizzas to devour and Foot to roll on, you can rest assured that Sumo Raphael will be around – and we do mean A-ROUND!