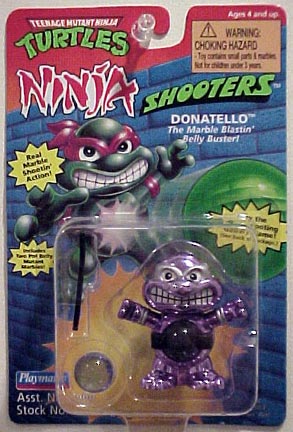 SINGLE NINJA SHOOTER
Position one of your own fiendish Foot action figures, or any other Turtle figure, on a flat surface. For beginners, place your Ninja Shooter 12″ aways from the Foot Soldier (expert players can set the Ninja Shooter 24″ away from the Foot Clan target). Load your Ninja Shooter with a Mutant Marble. Take aim at the Foot and shoot! If that doesn’t work, try another Mutant Marble! Whoever takes out the highest number of figures with the fewest number of shoots wins! Take up to ten shots, then check your rating.