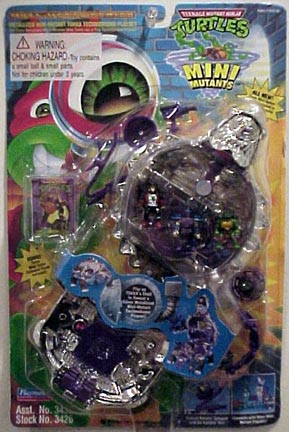 The gleam of metal and the sting of steel are what face Mini-Mutant Raphael as he tries to escape frmn the silver chamber of the horror known as the Metallized Mini-Mutant Tokka Technodrome. Raphael’s on his own, and he must escape before Mini-Mutant Shredder and Mini-Mutant Bebop track him down and take him for a spin on their Silver Metallized Turtle Tenderizin’ Table. If they catch him, it’ll be Turtle soup for dinner! Raphael lures boffo Mini-Mutant Bebop into the Ooze Reservoir, and makes his break through the Quick Escape Trapdoor. Racing to the second story of the Technodrome, Raphael launches the Radical Rotatin’ Catapult and lets the Air Catchin’ Net fly! Bullseye! Shredder is caught like a bug in the rug! Through the Detachable Eyeball Periscope, Raphael spots the calvary! It’s Mini-Mutant Leonardo, Michaelangelo and Donatello to the rescue! A little late, guys!