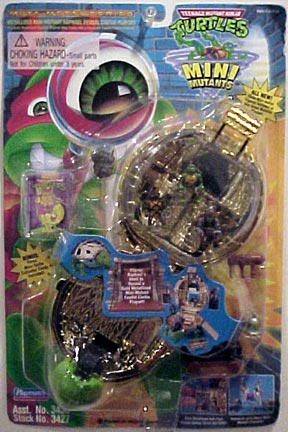 Distinguished by its prestigious, precious gold color, the Metallized Mini-Mutant Raphael Feudal Castle Playset is the heroic home of Mini-Mutant Raphael and Mini-Mutant Donatello. They had the entire place redone in early gold metallized plating. A gold covered castle is the only fitting place for Turtles of this caliber to live. But there’s always the threat that the repulsive rhino Rocksteady will drop by to dethrone our gallant green heroes. Not to worry though – this pad has everything the Turtles need to defend their stronghold and take out the enemy. Gold metallized anti-Foot feudal security turrent jail cells provide not only a good vantage point to look out for feudal Foot fools, but a great place to lock up any losers who dare to storm the castle. The super slick slidin’ log flattens anyone standing in its path. A fling from the Kowabunga Catapult can put a rock chunk drop on the Foot Clan. And the freewheelin’ weapons cart can supply ammo to the forces or can wheel Rocksteady away when the battle is over. The Turtles can take on anyone who dares to try and conquer their feudal territory! And if by some lucky chance the Foot get inside the castle, the Turtles can sneak down the bodacious back steps, get their weapons stowed away inside the storage chamber, then burst into their digs and throw Rocksteady off of their noble kowabunga throne. Or dent Rocksteady’s bad brain with the Waste ’em Warning Bell! When the battle’s over, simply pack up the castle accouterments and Turtle tuck away. Join Mini-Mutant Donatello and Mini-Mutant Raphael as they lower the drawbridge and join up to other shiny Muta-Metal Series Playsets: Mini-Mutant Leonardo’s Lair and Mini-Mutant Tokka’s Technodrome. All together they form one gaudy, glaring, garish Mini-Mutant world!