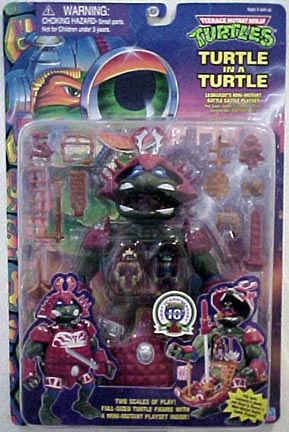 Lion-hearted Leonardo has a big surprise for the bad guys with his new Mutant Samurai disguise! He can transpizzafy into a super samurai fightin’ Battle Castle – and so can his battle buddy bro, Donatello! All you have to do is open up Leonardo’s shells and his head to engage in the ancient battle that has been raging for centuries! But those Foot Clan fools aren’t smart enough to be scared of him, and ol’ Shredder is just a mutant samurai sewer punk that always feels lucky: so you can expect a banzai attack at any time! But Leonardo’s Anti-Foot Fortress has a secret dual design! Donatello can protect their pizza palace with the Shredder-Smashin’ Catapult. No evil warrior battle spirit can save him this time! Plan number two lets Leonardo lure the lunkheads right into the bodacious banzai Battle Castle. With the Samurai-Slicin’ Swingin’ Blade in the heart of the fortress, you know who’s gonna win a samurai sword-fight in this dojo! The Buddha Turtle Trap Door and the Katana Emergency Escape Slide let our guys double back around the castle to trap any attacker! After the Clan is canned in the Kowabunga Kanji Kranial Kage, the Turtles finally get a little peace – and pizza!