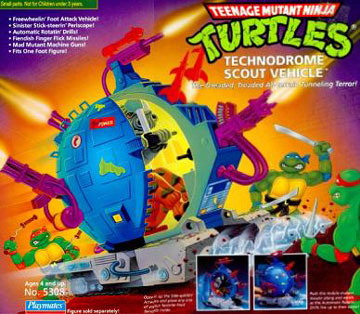 It’s the cool carvin’, ditch-diggin’, all-terrain, Turtle-terroizin’ Mutant maulin’ machine – the Technodrome Scout Vehicle, that is! Thanks to those ingenious engineers at Foot Clan Central, Shredder’s got a new mobile Mutant mushin’ machine and it’s just the right size. That’s right! This compact cruncher is built for one! It’s personal, yet colossal. It’s a one-manned mega Mutant mauler, jammed with an abundance of frightful features, cuz Shredder made sure his technicians didn’t cut corners.

Get a load of the goodies packed in this bad boy baby: equipped with finger flick missiles and Mutant machine guns, this battlin’ bruise cruiser can take any Foot fiend right into the heat of the city. And whether the Turtles wage war against this all-terrain terror above ground or underground, the Technodrome Scout Vehicle can get there with power and style. No place is safe when the automatic rotatin’ drills start spinnin’. There’s no place to hide from the 360 degree sinister stick-steerin’ periscope-and no face is without fear when this tremblin’ tractor tears into town.

NOTE: The Technodrome Scout Vehicle was first released in 1993 and then rereleased in 1998 as part of KB Toys line of rereleases. The box was actually all but identical to the original except for the addition of the Playmates web logo on the back.

Special thanks to Dan Wakerhauser for the release information.