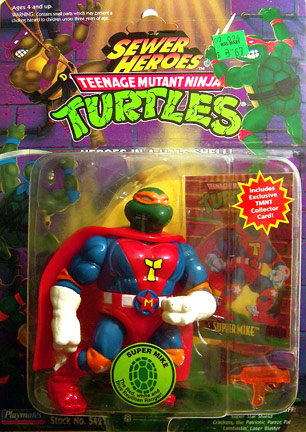 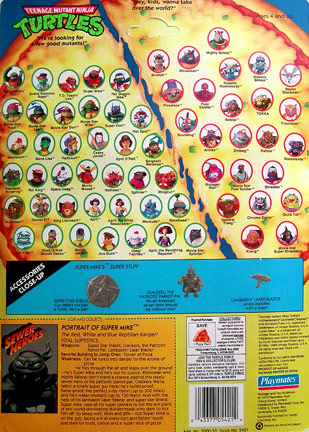 VITAL SUPTISTICS:
Weapons: Super Star Shield, Crackers the Patriotic Parrot Pal, Lambastin’ Laser Blaster
Favorite Building to Jump Over: Tower of Pizza
Weakness: Can be lured into danger by the aroma of pizza

He flies thorough the air and leaps over the ground – he’s Super Mike, and he’s out for justice. Rhinoman and Mighty Bebop don’t stand a chance against this steely sewer hero or his patriotic parrot pal, Crackers. We’re talkin’ a totally super guy here: he’s bullet-proof, flame-proof, has perfect x-ray vision (up to 300 miles) and he’s water resistant (up to 100 feet)! And with the help of the lambastin’ laser blaster and super star shield, Super Mike uses all his super powers to foil the evil plans of any world-dominating dunderheads who dare to tick him off. So sleep well, boys and girls – cuz Super Mike is on the job, facing evil at every turn and fightin’ tooth and shell for truth, justice and a super slice of pizza.