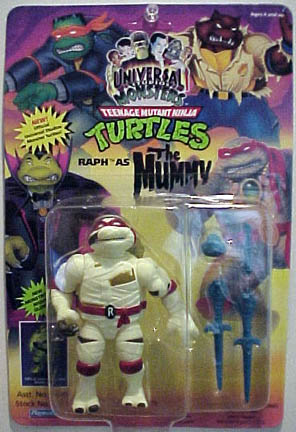 PORTRAIT OF RAPH as THE MUMMY
The Radical Wrapped Turtle!

Taped up in a pyramid for thousands of years, disturbed by the foul Foot, Raph the Mummy lives and breathes! And he’s glowin’ to get out of his tomb and stalk the earth, just like the classic Universal Mummy! Rising from its deep dark depths, Raph the Mummy climbs out of his sarcophagus in search of Shredder – and pizza. And he’ll make anyone who gets in his way pay! The cost wll be nothing less than one killer curse! And this is a curse that cannot be broken, except with a pepperoni pizza, drowin’ in olives. Raph’s easily won over by pizza, yes, but he’s still scary, cuz he glows in the dark! That helps him see at night, but it’s been so long since he’s seen the light of day, he may not know what he’s swingin’ at with his cobra sais and stealthy stone dagger! So beware – and if you ever hear a Mutant moan, you can be sure it’s Raph, the mumblin’, mummified monstrous Universal monster! Whoever wakes him up better have a wedge to serve him – or you will be forever cursed, just like the Clan!