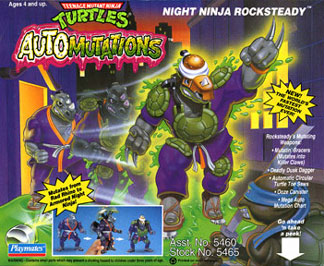 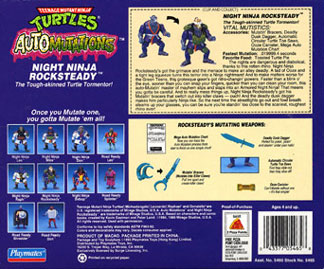 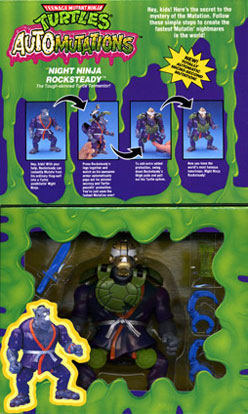 The nights are dangerous and diabolical, thanks to this rotten rhino. Night Ninja Rocksteady’s got the grimace and the menace to make an alley deadly. A tad of Ooze and a tight leg squeeze turns this terror into a Ninja nightmare! And to make matters worse for the Green Teens, this grotesque goon’s got nitro-chargin’ powers. Faster than a blink o’ the eye, sooner than you can snap your fingers, quicker than you can clean your room, this Auto-Mutatin’ master of mayhem slips and slaps into an Armored Night Ninja! That means you gotta be careful. And to really mess things up, Night Ninja Rocksteady’s got his Mutatin’ bracers that switch out into killer claws – ouch! And the deadly dusk dagger makes him particularly Ninja-like. So the next time the streetlights go out and fowl breath steams up your glasses, you can be sure you’re standin’ too close to the scariest, roughest rhino ever!