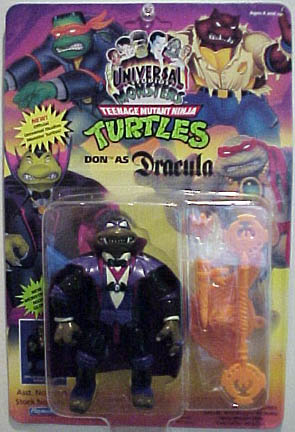 PORTRAIT OF DON as DRACULA
The Fanged Foot Fighter!

Just like the Universal Monster, Dracula, this Turtle has developed an unquenchable thirst – for the blood of foolish Foot villagers – and pizza sauce! Dracula Don stalks the Old Country’s sewers in Pizzavania, searching for serious sustenance – and he won’t settle for just plain pizza! By day, he’s avoidin’ the sun and hangin’ with the Undead in his Kowabunga coffin. But look out, Foot Clan, cuz when night falls, this Mutant monster sprouts fiendish fangs and begins to glow – and when he turns colors, extra-thick pizza crust just won’t fill him up! If this campy vampire’s on the pepperoni prowl with his wrist wrappin’ sidekick, Bat Buddy, then you can be sure he’s huntin’ that nasty-necked Ninja ninny, Shredder. And to really drive home the point, the Foot better beware of Dracky’s wacky wooden stake. The only thing that can save Shredder and the Clan from this non-reflecting Ninja is a deep dish pan pizza with extra garlic. Got any?