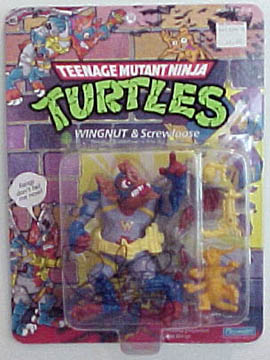 PORTRAIT OF WINGNUT & Screwloose
Dingbat Buddies who Bite the Baddies!

Wingnut, the clutzy, caped vampire bat, quietly hung out on his home planet Huanu. That is, until Krang destroyed it. Saved and sucked into a vortex before his planet exploded, Wingnut ended up on Earth, along with Screwloose, a levelheaded Huanu mosquito.

Furious and frantic that Krang blew up his planet, the crazed Wingnut’s out to get even with Krang – or anyone else associated with the burbling brain. That makes him a perfect ally with the Turtle teens.

Despite Wingnut’s bloodshot eyes, defective radar, stunted wings and oversensitive ears, he’s determined to be a sewer-superhero. Even with constant training from our green teens, Wingnut’s more likely to bump into a building than bust a baddie. Armed with mechanical turbo wings invented by Donatello, Wingnut flutters and putters to put the bite on the Foot Clan.