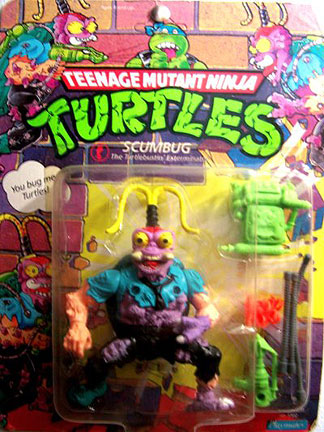 PORTRAIT OF SCUMBUG
The Turtlebustin’ Exterminator!
VITAL BUGTISTICS:
Accessories: Bug Pack with Hose Assembly, Turtle Exterminating Gun
Birthplace: Under Shredder’s Foot
Height: 5′ 5″ (with fully extended antennae)
Weight: 200 poisonous pounds of 91 killer kilos
Favortie Food: Roached Eggs
Sent to eliminate the bug problem in the Technodrome, a mild-mannered exterminator got accidentally oozed and mutated into the scampering, sickening Scumbug. Unable to face other customers, Scumbag saddled up with Shredder as his ace assassin.
Armed with his poisonous pinchers and a tank full of Anti-Turtle Spray, this rude roach chews his way through almost anything. His power claw and bullet-proof shell make him a tough Turtlebustin’ bug. And when the going gets rough, this roach gets other bugs to rally ’round him. Using his super-sensitive antennae as a telepathic link to insidious insects, Scumbug’s the Pied Piper of the creepy and the crawly. You’ll know when you’re near his army – just listen for the crunch.
Additional image provided by Vaughn Michael
©1990 Playmates Toys