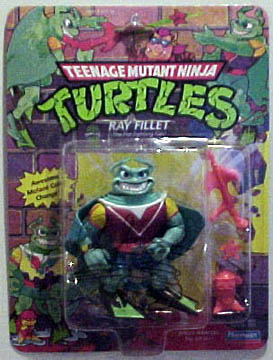 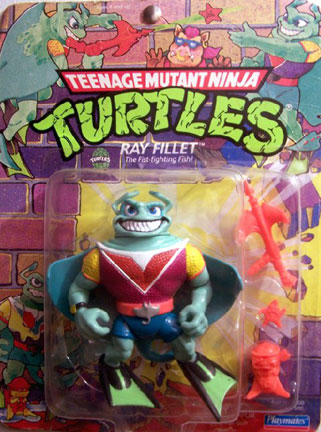 PORTRAIT OF RAY FILLET
The Fist-fighting Fish!
VITAL FISHTISTICS
Accessories: Ray Gill Gun, Fish Stix, Scarfish
Birthplace: 1999.5 leagues below the sea
Water Displacement: 500 lbs.
Favorite Movie: The Deep
Favortie Saying: Suck saltwater, dude!
You smell something fishy? That’s because you just picked up Ray Fillet, the coolest sea creature to ever leap from the deep. Spawned from a marine biologist and a manta ray, Ray Fillet emerged from a toxic sewer pipe only to discover himself super-strong and super-slimy.
He’s a Foot-fightin’ fish who helps the Turtles when they’re in deep trouble – underwater, that is. Ray rescues best when he’s submerged, ’cause his color changing transforms him from water wimp to a fist-fighting fish. Aquatically assisted by Fish Stix, Ray Fillet filters out crime from the coral reef. Using his mean-faced Scarfish weapon and Ray Gill Gun, the Foot don’t stand a chance when they’re up to their knees in water.
Additional image provided by Vaughn Michael
©1990 Playmates Toys