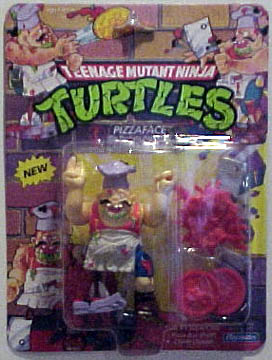 PORTRAIT OF PIZZAFACE
The Psychotic Pizza Chef!
VITAL PIZZATISTICS
Accessories: Pizza Peg Leg, Clever Cleaver, Pizza Box Shield, Two Propelling Pizzas
Birthplace: Pisa, Italy
Blood Type: Extra Spicy
Weight: Deep Pan Extra Large
Favorite Topping: Mutant Turtles
Favortie Fish: Anchovy
Pizzaface – Shredder’s crazed culinary creator – had a plan to become the most powerful pizza chef ever. So he zapped himself in his Retromutagen oven, hoping the energy would bake him with badness. But the hungry Turtle Teens burst into the parlor and pulled Pizzaface out. Now this half-baked bozo wants to get even with the Turtles for foiling his formula. All the Turtles wanted was a large pepperoni to go – but instead they got part pizza and part Pizzaface!
Possessing the power of the pizza pie, Pizzaface is the ultimate Turtle nightmare: traveling from parlor to parlor, he terrorizes the Turtles, trying to turn them into tasty teen topping. Armed with flying pizzas and a Pizza Box Shield, this peg-legged pizza piper follows the Foot, even though he’s only got one good leg. And what’s worse? He delivers.
©1990 Playmates Toys