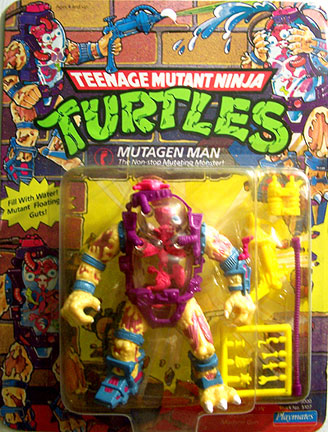 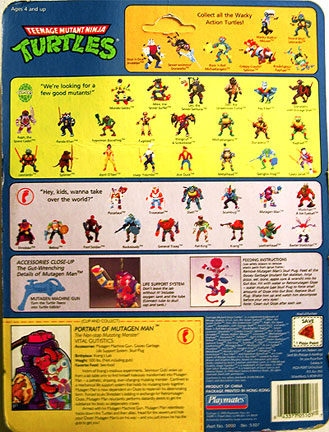 PORTRAIT OF MUTAGEN MAN
The Non-stop Mutating Monster!
VITAL GUTISTICS:
Accessories: Mutagen Machine Gun, Gooey Garbage, Life Support System, Skull Plug
Birthplace: Krang’s lab
Weight: 500 lbs. (not including guts)
Favortie Food: See-food
Victim of Krang’s insidious experiments, Seymour Gutz woke up from a lab table only to find himself hideously transformed into Mutagen Man – a pathetic, dripping, ever-changing mutating monster. Confined to a mechanical life support system that holds his mutating body together, Mutagen Man is now dependent on Ooze to replenish his deteriorating form. Forced to do Shredder’s bidding in exchange for Retromutagen Ooze, Mutagen Man reluctantly performs dastardly deeds to get the substance his body so desperately craves.
Armed with his Mutagen Machine Gun, Mutagen Man relentlessly tracks down the Turtles and their allies. Head for the sewers and hide your Ooze! Mutagen Man’s on his way – and you just know he has the guts to get you!
Images provided by Vaughn Michael
©1990 Playmates Toys