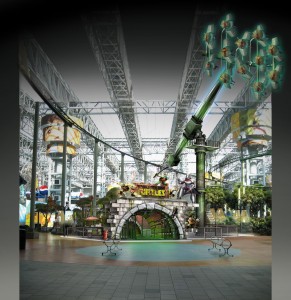 Nickelodeon Universe is taking the thrill to the next level with the addition of Teenage Mutant Ninja Turtles Shell Shock, the first ever ride of its kind in the United States. Themed after the popular animated series, the interactive ride will put the adventure in guests’ hands as they control their experience from take-off to landing. To celebrate the addition, Nickelodeon Universe is calling all fans at 8 a.m. on Saturday, March 17, to help break the world record for the largest gathering of Ninja Turtles which currently stands at 786. Participants will receive a free ride on Shell Shock, a Teenage Mutant Ninja Turtles t-shirt and a mask while supplies last.

Teenage Mutant Ninja Turtles Shell Shock, scheduled to debut in March 2012, will take riders 70 feet in the air in a matter of seconds reaching up to 25 mph. With 12 single bucket seats at the end of a cantilevered arm that rotates around a central tower, this ride is a thrill-seekers dream. Each guest will control their seat which can rotate wildly like a plane propeller or a gentle teeter-totter like a see-saw making no two ride experiences the same. The attraction is based on the highly-anticipated all-new CG-animated television series, Teenage Mutant Ninja Turtles, which will premiere on Nickelodeon later this year.

“Teenage Mutant Ninja Turtles Shell Shock continues the momentum of fun and excitement that Nickelodeon Universe offers to Mall of America guests every day,” says Jennifer Lauerman, Nickelodeon Universe marketing director. “We can’t wait to see the ride take off for its first time and hear the screams of excited riders.”

“We’re excited to be working with a great longstanding partner like Mall of America to help give fans their first interactive experience with Nickelodeon’s new incarnation of the iconic Teenage Mutant Ninja Turtles property,” said Pam, Kaufman, Chief Marketing Officer with Nickelodeon. “Fans of all ages are in for the ride of their lives with this cutting-edge new attraction featuring the beloved heroes in a half shell.”

A second new attraction to Nickelodeon Universe will also open in March, Dutchman’s Deck Anchor drop stainless steel spiral tube slide system. These two intertwining tubes will over quite the thrill for guests from 56 and 35 ft. in the air. One leaves from the third level while the other one leave from the top of the Flying Dutchman Ghostly Gangplank Adventure Ropes Course. The attraction is based on the Flying Dutchman character from Nickelodeon’sSpongeBob SquarePants—the number one animated series with kids for the last 12 consecutive years.  Admission to the slides will be included in Ropes Course admission or can be purchased for $2 per person with a wristband purchase or $3 per person without a wristband purchase.

For more information on the new ride visit www.mallofamerica.com or www.nickelodeonuniverse.com.

About Mall of America®
Mall of America is the nation’s largest retail and entertainment complex. At 4.2 million square feet, MOA is home to more than 520 world-class shops; Nickelodeon Universe®, the nation’s largest indoor family amusement park; SEA LIFE Minnesota Aquarium, a 1.2 million gallon walk- through aquarium; Moose Mountain Adventure Golf; Theatres at Mall of America® – a 14-screen movie theater with VIP theatre and more. The Mall opened in August of 1992 and is located in Bloomington, Minn., just minutes from downtown Minneapolis and St. Paul. Follow Mall of America onFacebook and Twitter or visit our blog.

Nickelodeon, now in its 32nd year, is the number-one entertainment brand for kids. It has built a diverse, global business by putting kids first in everything it does. The company includes television programming and production in the United States and around the world, plus consumer products, online, recreation, books and feature films. Nickelodeon’s U.S. television network is seen in more than 100 million households and has been the number-one-rated basic cable network for 17 consecutive years. For more information or artwork, visit www.nickpress.com. Nickelodeon and all related titles, characters and logos are trademarks of Viacom Inc. (NASDAQ: VIA – News, VIA.B –News).