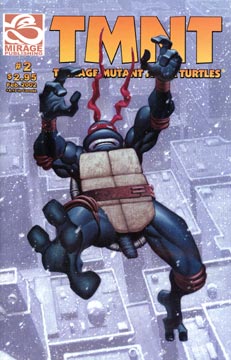 Michelangelo awakes in an ambulance and tries to escape – only to find that it’s a flying ambulance! A winged super hero comes to his rescue and he’s taken to a hospital where he meets an old friend. Don, Raph and Casey investigate the abandoned armored car. Meanwhile in Massachusetts, Shadow rides off on her dirt bike to escape Splinter’s mothering and meets up with her boyfriend. More oddities occur on the moon…