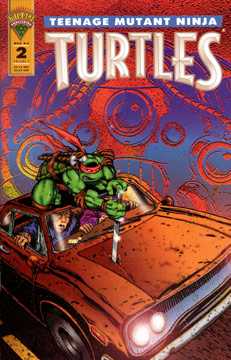 Raphael is bored and tired of living in April’s apartment building, thus he decides he’s moving out. Leonardo notes that they really should find a new place to live, before they’re discovered.
We’re introduced to the Defense and Research Projects Administration (D.A.R.P.A.), a top secret facility in the desert. Baxter Stockman has broken into the place and is wreaking havoc.

Donatello is spotted by some Jehovah’s Witnesses at Casey’s farmhouse in Northampton.

Leonardo is running along the rooftops of New York City, lamenting that the family is finally breaking up. He spots a drive-by shooting and chases the murderers, leaping onto their vehicle and causing it to crash violently. Much to his dismay, Leo comes to the conclusion that life is chaos.

Baxter, having killed numerous guards at D.A.R.P.A., is now preparing himself for some sort of brain surgery.