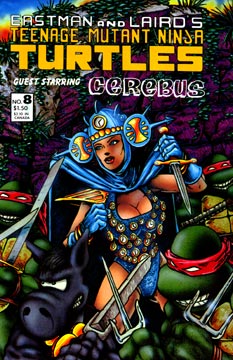 Dave wrote and lettered the dialogue for Cerebus and he and Gerhard inked/toned the acidic aardvark.

This story begins as Renet, the apprentice to time master Lord Simultaneous, “borrows” her boss’ sceptre that contains the “sacred sands of time.” The wand allows its wielder to be taken anywhere in time and space by merely wishing to go. Just as Renet grasps the sceptre, she is discovered by Simultaneous, who is not happy with her. In fear and desperation, Renet wishes to be sent to New York, circa 1986.

As the Fates would have it, Renet is transported to a rooftop in New York City, where the Turtles are goofing around. Renet quickly makes friends with the boys when they’re suddenly interrupted by an enraged Lord Simultaneous. Renet wishes to be taken “anyplace on Earth before humans recorded time!”

Back in the past, we find Cerebus being awakened by his henchmen. It seems that the men are uncomfortable with the aardvark’s plan to invade a foreboding castle and so they announce their plan to desert him. Cerebus threatens them and tries to get back to sleep, when Renet and Turtles emerge through a portal in a flash of magical light. As the Turtles struggle to their feet, we see that within the castle a satyr-like being awakes, alerted to the presence of the Time Sceptre.

Leo apologizes to Cerebus for crash landing in his camp, but the aardvark is in no mood for discussions. As the two prepare for battle, Renet tells them to chill out and offers to explain everything. While Renet tells the tale of why she’s bouncing through time (she was bored), Savanti Romero (the satyr-like dude) and his army rush out of the castle to fetch the Sceptre.

Our heroes hear the approaching warriors too late, and while they make efforts to escape, Savanti easily overcomes them with magic and takes the Time Sceptre. The wizard and his men retreat back to the fortress and leave our heroes unconscious on the ground.

A few hours later, the TMNT, Renet and Cerebus find a town and go into a tavern. Cerebus arranges for a mercenary force to attack the castle at dawn by lying to them. The next morning the hired army attacks the fortress as the Turtles, Cerebus and Renet scale the castle walls. Savanti conjures an army of undead to fight the human attackers as the heroes battle their way into the castle. Eventually the TMNT and crew make it to Romero’s inner chamber, but they’re quickly subdued by his magic. As Savanti ponders how to kill them, Lord Simultaneous shows up. Romero casts numerous spells in effort to defeat Simultaneous, but all his efforts are in vain. The time lord explains that the Sceptre is old technology and then displays the new trans-temporal talisman – the Digital Cosmic Quartz (a wrist watch). Simultaneous zaps Romero and he disappears. He then sends the TMNT back home and gives Cerebus the scrolls he came to the castle to get. Finally, Simultaneous returns home, where he punishes Renet by making her dust his vast library.

Having lost rights to include Cerebus in their publications, for a long time Mirage Studios were unable to reprint TMNT v1 # 08, which actually was of much importance to the TMNT chronology. The issue included the first appearances of such characters as Renet and Savanti Romero. That’s why in 2006 the story was remade into another one, not containing crossover with Cerebus. But the comic was only available in Spain, through Norma Editorial compilations. Now the English version is available as Tales of the TMNT v2 # 71. The cover and frontispiece Were done by Arseniy Dubakov aka Demon-Alukard (TMNT v3 # 24, #25). The main story was done by Stephen Murphy (writer), Jim Lawson (pencils) and Eric Talbot (inks). The story actually turned out to be not a substitute for the original TMNT v1 # 08, BUT more of an addition – Both stories take place in the existing chronology, and do not contradict Each Other!