This story is continued from TMNT #5

The Fugitoid, a captive on one of the Triceratons’ Asteroid Ships, is taken to the Triceraton Homeworld – an unbelievable conglomerate of other Asteroid Ships connected into a single gigantic planetoid. As the Triceratons try to convince a doubtful Honeycutt (now spelled with two “ts” for some reason) to join them, the TMNT are found onboard the ship which brought them here. The Turtles have put themselves into a meditative trance to conserve the limited oxygen that was available in the cargo hold during the space journey. Surprisingly, the Triceratons who find our heroes decide to keep them alive.

Meanwhile, the Triceraton High Council is meeting with the Fugitoid in effort to convince him that the Federation is a terrorist organization that must be stopped. Prime Leader Zanramon of the Triceratons states that the good doctor’s Transmat device is just what they need to accomplish their goal. Honeycutt confesses that even if he could build the device, he wouldn’t do it for anyone, as he has no desire to see it used as a weapon. As Zanramon makes a veiled threat, he is interrupted by his men who display the captured TMNT. The Fugitoid asks the Triceratons not to harm his friends and the High Council quickly seize on the opportunity to blackmail Honeycut into working for them.

The Turtles are shackled and lead to a jail cel. Before they’re incarcerated, Michaelangelo picks a fight with one of the guards and a scuffle breaks out. The Triceratons are impressed with Mike’s spunk, but the battle is easily won by the saurians (who have the advantage of being unbound) and the Turtles are thrown headlong into the awaiting prison.

We cut to the Fugitoid who is mourning the situation alone in nice quarters. Honeycutt decides that he cannot work on the Transmat, even if it means the death of himself and his four friends.

Back on Earth, we find April entering her apartment and missing the boys, who have been gone for 2 days. April turns on the television and hears a news report regarding a strange phenomena emanating from the T.C.R.I. building (where the Turtles had gone 2 days ago). A police captain explains that when the boys in blue attempted to enter the building to investigate, it sealed itself off and has become an impenetrable fortress. The National Guard has been requested for back-up. April sits on the floor in shock and dejectedly wonders what she can do to help her friends.

On the Triceraton homeworld, the TMNT are being forced to fight for their lives in a monstrous arena filled with thousands of blood-thristy fans. Fortunately the boys are no longer shackled, and their battle against the Triceraton gladiators goes well. As the fight wages, one of the television camera ships that’s covering the event zooms in too close to the action and the TMNT are able to board it. The Green Team maneuvers the vehicle to the platform housing the Triceraton High Council and the Fugitoid and bail out. The Turtles quickly take the Prime Leader hostage and prompt him to lead them to a ship. As they approach the hangar, our heroes are ambushed. Zanramon is killed in the crossfire by his own men. Just as the Turtles and Honeycut are about to be blasted to bits, they’re engulfed in a power field… along with 3 Triceraton warriors. 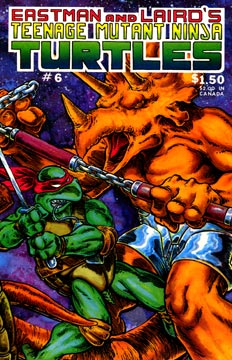 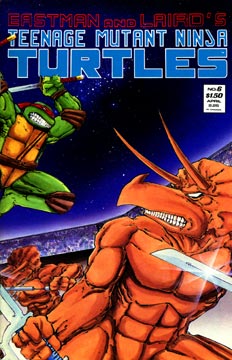