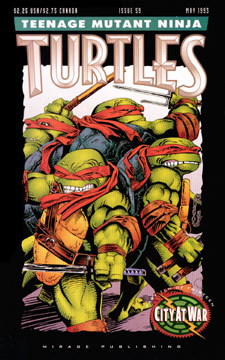 The TMNT are working on some sort of mechanical project as Karai leads a troop of her Foot Soldiers on patrol. An Elite spies Karai and her band and is shocked, because he thinks he’s seen his Master, the Shredder (in reality it is only Karai wearing Shredder’s armor).

The old man is standing in the hospital watching the TV news, and once again it features stories of political strife. The man leaves the room with the assistance of his walker.

Casey is at the diner where he had worked with Gabby, depressively nursing a cup of coffee. Suddenly a car screeches into the parking lot – it’s Jones’ Chevy! The cook asks Casey if he should call the cops, but Jones tells him he’ll take care of it. Casey goes out to the parking lot and beats up the two thieves and retrieves his car.

Master Splinter is finally healed and exploring the bottom of the huge silo that he’s trapped in. As he searches for a way out, he comes upon the skeletal remains of the Rat King.

“Ah… once more the universe allows a glimpse… of its myriad wonders… its imponderable mysteries!” the Sensei declares, “Yet, it is ever so… from Life, Death… and from Death… Life!”

Invigorated, Master Splinter uses his ninja skills to climb the sheer brick wall of the silo, ultimately achieving his freedom.

Casey Jones is driving east in his Chevy, his baby daughter named Shadow nestled in her baby carrier beside him.

Robyn and April are visiting the burned out remains of their father’s antique shop in New York City. Robyn is distraught to see this place filled with so many wonderful childhood memories reduced to a shambles.

“I hate seeing it like this!” Robyn exclaims, “Growing up – there was so much life here!”

“Maybe it’s better that it’ll be torn down… I mean, everything passes, huh April?” queries Robyn.

Robyn asks April what she plans to do, but April isn’t sure. With that the sisters part ways, as Robyn has a flight to catch to California.

Before she leaves, April hears a noise from within the decrepit structure, but sees nothing.

“Hmm… probably the wind or a rat… a rat…” she sighs, and hails a cab to take her away.

Inside the building, Mike is watching April drive off. The Turtles are meeting with Karai and her Soldiers. Raph demands to know why Karai has called them here, and the Clan leader tells him that she was curious to see the place, as it holds so much significance to the events that lead them all to their current destiny.

Mike and Raph don’t like being in the building, especially since it was the Foot who burned it down. Leo bends down and finds a photograph of April and Casey, in happier times. He folds the photograph in half and puts it in his belt for safe keeping.

“Enough reminiscing,” the Turtle’s leader announces, “We have a job to do.”

“And scores to settle. Let’s move on.” Karai states.

Just then a crack appears in the ceiling and a group of Elite drop through the roof.