In this issue, the Turtles return to their sewer lair to find that Splinter has been abducted by the Mousers. They call the only person who they know that might help them… April! She shows up in a van, and a wild car chase ensues when the police mistakenly think that April’s vehicle was the one used in a recent robbery. As luck would have it, the chase leads the cops to the actual robbers in their van… which looks exactly like April’s vehicle! April and the TMNT make their escape and head for her apartment to rest and make plans to find Splinter.

Meanwhile, Splinter takes a serious blow to the head while battling the Mousers in the sewer. Just as the rabid robots are about to make mouse meat out of the Sensei, they mysteriously march off in another direction. Splinter, dazed and nearly unconscious, takes this opportunity to escape by crawling into the tepid waters of the sewer system. The Master is discovered by two human guards, who take him to the TCRI laboratories. At the hi-tech facilities, Splinter discovers that the humans that work there are actually small alien creatures that utilize humanoid robotic bodies to disguise themselves. These aliens are the precursors to what will become Krang on the television cartoon. 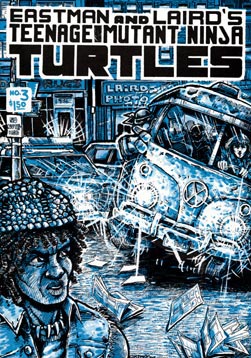 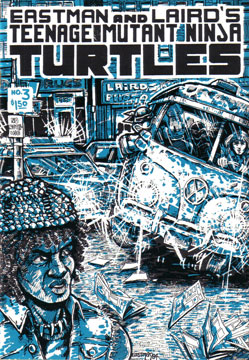 NY Comic Con Printing: 1985
NOTE: Kevin and Peter had 500 advance copies of #3 printed to sell at the NY Comic Con. This edition is identifiable by its stark white cover (some of the blue toning dropped out – this is most recognizable in the foreground figure’s face and the “Laird’s Photo” sign). The interior of the book is identical to the regular edition. 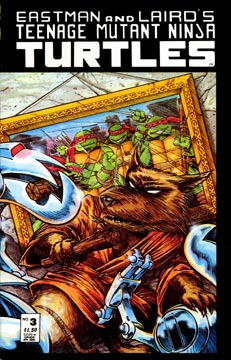