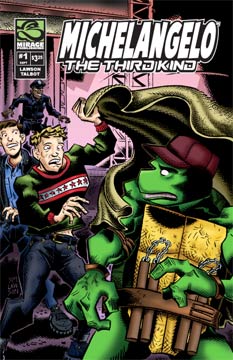 The first book of this four-issue mini-series kicks off during the events that occurred during TMNT Volume Four #5, specifically the time period immediately following the arrival of the Utrom’s “Moon Island” on Earth. Michelangelo is swept up in the tension and chaos that grips New York in the wake of humanity’s first contact with alien life!