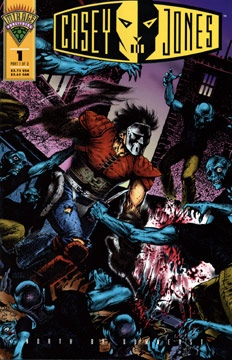 On a dark and stormy night, Casey Jones walks through the sewers and into the Turtles’ lair, where he begins to tell them a weird tale.

On a boring Friday night, Casey was just about to give up hope of finding some crime to fight when he overheard two drug addicts stealing a tub of lobsters from an apartment. Jones immediately intervened and tripped up the thieves, who fell to the ground along with the lobster tank, sending glass, crackheads and crustaceans sprawling all over the alleyway below. Casey grabbed a lobster and considered cooking it up for a late night snack when he was hit from behind and knocked unconscious.

When Jones awoke, he saw a huge lobster staring down at him, which quickly morphed into the face of a blue freaky dude. The blue men were searching for the “Royal Roe” and tearing apart all of the lobsters from the tank – to no avail. As the one who clobbered Casey wondered if he should dispose of the human, Jones lashed out and a brawl began. Jones beat the blue dudes, but he was distracted by a nearby television, that allowed the bizarre men to knock Casey out once again by hitting him from behind.

Jones awoke to find himself being carried underwater by the blue men. The strange fellows had decided to strip Casey of his “protective armor” and take it for themselves. When they went to take his mask, Casey fought back, but being short on air and out of his element, Jones was unable to best his opponents a second time. As Casey struggled, one of the blue guys simply pushed him into a current that carried Jones straight out of the giant shell he had been inside.

Casey tried to swim to the surface to get some air, but became tangled in a trap line and lost consciousness yet again.

Soon enough, Casey is pulled up to a boat and saved by a lobster fisher named Gabby, an attractive woman with the odd habit of smoking a corn cob pipe. Gabby revives Casey and makes him some hot cocoa while Jones tells her the beginning of his gonzo story…