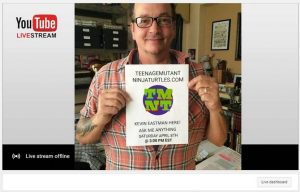 Detroit, Michigan, April, 6th, 2017: Have you ever wondered exactly how the Teenage Mutant Ninja Turtles came into being? Or who exactly the man behind the heroes in a half shell is, what else he’s had a hand in creating? Or, if these are questions that you already know the answers to as a Turtles superfan; then how about a more complex query like: How did the first 1990s live-action Teenage Mutant Ninja Turtles movie come to be made? How was it decided what Shredder would look like in the original early 1980s Turtles comic book? Teenage Mutant Ninja Turtles co-creator Kevin Eastman has all the answers for any Turtles fan dying from suspense, and he’s making himself available to all Turtles fans this Saturday, April 8th, 2017 for one hour via an exclusive live-streaming event.

The largest Teenage Mutant Ninja Turtles fan website, TeenageMutantNinjaTurtles.com has enlisted Eastman for a one hour, for an interactive sit down with Turtles fans online to participate and engage via a live steaming exclusive Q&A where the Turtles creator will answer any and all Turtles questions by fans of the Turtles comic book, classic animated series, movies, and new Nickelodeon series and Michael Bay films. Fans will have the opportunity to ask their questions to Eastman and along the way also have the opportunity to win Turtles prizes such as TMNT t-shirts, action figures and other TMNT-related goodies.