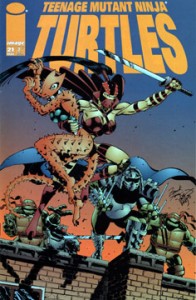 The police arrive at the history museum and meet the frantic security guard, who warns the officers about the “dinosaurs” that have come to life. As the cops try to calm the man down, the body of a Triceraton warrior smashes into their squad car. Inside the building, Don and Horridus search for the last remaining enemy. Sara (Horridus’ adopted name) spots the Triceraton and leaps towards him, as Don calls out for her to stop as the alien is holding some sort of bomb. A brilliant flash of light fills the room and the cybernetic Turtle discovers that the warrior used some sort of personal teleportation device to escape – apparently with Horridus in tow! Donatello summons his aircar via remote control and makes his escape.

Leatherhead, Casey and Mike battle the Triceratons, but are sorely outnumbered. Just as they decide it’s time to retreat, Leo, Raphael and the Foot Clan arrive and join the fray. With the help of the reinforcements, the tide of the battle turns in favor of our heroes – but more Triceratons continue to teleport in via Leatherhead’s transmat. Michaelangelo destroys the console to the teleportal device, enraging LH. The aliens are eventually defeated, the Foot suffer three deaths and seven injuries. Casey thanks Raph for his help and the “Shredder” and Leo make amends. As the Foot leave, Leo and Mike ponder how the fight would have gone without Raphael’s Foot to assist them, and Leatherhead apologizes for freaking out over the dismantling of his transmat. Dr. X states that he can help Leatherhead get the device working again.

Don calls April to see if she knows what’s up with Master Splinter, and she goes downstairs to check on him – finding him unconscious and tied up with a telephone cord!

Back in the sewer, Dr. X has gotten the transmat working again and our heroes are using it to send the dead bodies of the Triceratons back where they came from. Just as they send the final corpse back, another Triceraton warrior ports in – with Horridus on his back, punching him in the eye and demanding information. Leatherhead attacks the saurian with animalistic ferocity, tearing him to pieces. Dr. X notes that his friend is regressing at an alarming rate. The Triceraton activates his teleportal device, and both he and Leatherhead disappear! Dr. X informs the group that there’s no way to trace where they went – they could be anywhere on Earth or off – Leatherhead is on his own. Horridus is happy to see Mike again and leaps in his arms, repeatedly kissing him.

Later, as Raph patrols the city in his Shredder armor, he is attacked by four members of the Japanese Foot Clan. Raph defeats them but is then surprised and knocked down by two men in black. The ninjas introduce themselves as part of the Council of Five, the Foot’s leading body. The men state that they’ve come from Japan to test Raphael. Raph asks why Karai didn’t come and they inform him that she is no longer a member of the Council. The Turtle then asks if he’s failed their test, and they inform him that they’re very inmpressed by his abilities – they only expected him to be able to beat two of their ninjas, not all four. The Council members then state that Raph has proven to be an asset to the Foot Clan, but someone else claims the right to wear Shredder’s armor and lead the New York branch – none other than Pimiko!