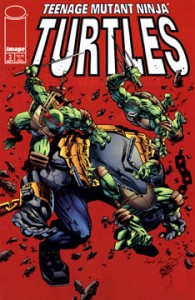 Raph and Mike face off with Pimiko and her ninjas while Leo continues to speak with Donatello via astral protection. Don is now back in his paralyzed body and suffering tremendous pain. Leonardo bids farewell to his brother and heads back to his body so he can help Don on the physical plane. On the way, Leo meets Master Splinter on the astral plane, who informs his student that he remains a prisoner and cannot help, other than to escort Leo safely back to his body. In Lord Komodo’s lab, the scientists inform the Dragonlord that Splinter contains mostly animal DNA, which pleases the overlord.

Don encounters a hungry rat as he lies prone in the alley, while Master Splinter is taken to meet Lord Komodo. The Dragonlord informs Splinter that he is heir to the Dragon Bushido Spirit, his ancestors once ruled Japan and he intends to do so again. Splinter states that he is honored to meet the heir to the Dragon Bushido and introduces himself as a humble ninja. Komodo replies that this claim must be proven, and orders two samurai to attack. Master Splinter easily defeats them. The Dragonlord is upset that his elite guard fell so easily, but he bows to Master Splinter and apologizes for treating him so poorly. Splinter bows in return and the two share tea. Lord Komodo asks Splinter how he came to be in this form, and the Sensei retells his origin (from TMNT volume one #1).

Mike and Raph continue to fight Pimiko and her minions. Unfortunately the villains get the upper hand by holding Leo hostage. Pimiko tells Raph that she’ll be taking Leonardo with her, but he awakens at that moment and escapes her grasp. The female ninja breaks the room’s lightbulb and she and her remaining ninjas flee. The guys give chase but see them flying off in a helicopter. As Leo and Mike watch dejectedly, Raph arrives in a Triceraton aircar that Don had found in the sewers and finished (apparently Zog was working on it before the events of “Return to New York” in TMNT volume one #19-21). The Turtles take off in the aircar to help Don.

Back at Lord Komodo’s base, the Dragonlord is showing Splinter a chamber that is filled with anthropomorphs that lie dead in tubes. Komodo explains that one of them must hold the key to splicing human and animal DNA – and discovering this secret will allow Komodo to unleash the power of the ancient dragons that “slumbers inside” of him. Splinter questions if the deaths of so many was necessary, but Komodo brushes off the question and states that killing them was “an act of mercy” as they were all savage brutes. As the two leave the room and walk down a hallway, Splinter is alarmed by the stench of carnage. Lord Komodo explains that it is probably the road kill that they use to feed Mako, as he insists on eating meat. Just then, a huge shark-mutant attacks, punching the Dragnlord in the face and knocking him unconscious… leaving Splinter alone to face the monster.

Leo, Raph and Mike arrive at the alley where Don’s body is – but they find nothing but his skeletal remains!