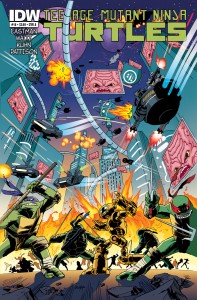 The Turtles are stranded in Dimension X! With Krang waging a massive war against the Neutrinos, the Turtles have no choice but to help. What can four lone Turtles do against an army of Stone Soldiers? The answer lies with a curious robot named the Fugitoid!