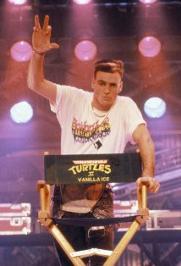 Robert Matthew Van Winkle, better known by his stage name Vanilla Ice, is an American rap artist. He is best known for his songs “Ice Ice Baby” and “Ninja Rap”.

Ice appeared in Teenage Mutant Ninja Turtles II: The Secret of the Ooze, where a battle between the Ninja Turtles and Rahzar & Tokka interrupted a performance he was giving at a club. The Turtles’ appearance prompted him to improvise a song titled “Ninja Rap.”