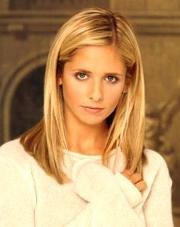 Sarah Michelle Gellar (also known as Sarah Michelle Prinze) is best known for playing Buffy Summers in Buffy the Vampire Slayer and a few episodes in its spin-off series Angel. She was also notable for playing Kathryn Merteuil in Cruel Intentions, Kendall Hart in the long running soap opera, All My Children, and Daphne Blake in the live-action Scooby Doo films.