Kevin Brooks Eastman (born May 30, 1962) is an American comic book artist and writer, best known as the creator (together with Peter Laird) of the Teenage Mutant Ninja Turtles. Eastman is also the current owner, editor and publisher of the magazine Heavy Metal.

Laird’s newspaper experience led to the two creating “a four-page press kit,” that, according to Flaming Carrot-creator Bob Burden’s own Mystery Men press-kit included “a story outline and artwork that they sent to 180 TV and radio stations,” as well as both the Associated Press and United Press International. This led to widespread press coverage of both the TMNT property and Mirage Studios itself, creating “a demand for the interestingly-titled comic that caught everyone by surprise.” With the solicitation of their second issue, Eastman and Laird’s Turtles comic began a meteoric rise to success, bringing in advance orders of 15,000 copies – five times the initial print run of the first issue. This, Eastman has been quoted as saying:

“basically ended up with us clearing a profit of two thousand dollars apiece. Which allowed us to write and draw stories full time: it was enough to pay the rent, pay the bills, and buy enough macaroni and cheese and pencils to live on.”

Eastman and Laird, as with many creative partnerships did not always see eye-to-eye, and their creative partnership became difficult. Speaking in 2002, Laird noted that the two “didn’t really have anything to do with each other for the last nine years. He had moved to California and I stayed in Massachusetts.”

On June 1, 2000 Peter Laird and the Mirage Group purchased all of Kevin’s ownership in the TMNT property and the corporations, except for a small continuing income participation. Laird believes that the reasoning was simply that Eastman “was just tired of it. He wanted to move on and has other things to spend more time on.”

On March 1, 2008 Peter Laird and the Mirage Group completed the buyout of Kevin’s entire right, title, interest and income participation in the TMNT property and the four Mirage corporations involved in the ownership, management and protection of the TMNT. This event finalizes the transaction begun on June 1, 2000.

On May 19, 2011 Comic Alliance announced the creative team behind the new IDW comic book and it was revealed that Kevin Eastman would be working with TMNT again. 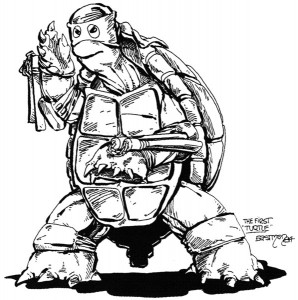