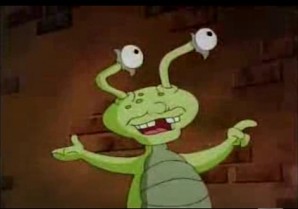 Joe Eyeball was the sidekick of Muckman. Originally known as Joe Junkee, both he and Garson Grunge were two garbagemen who had been mutated by Bebop andRocksteady. They took the names Muckman and Joe Eyeball. The pair were at first enemies of the turtles because they blamed them for their accident, but they eventually helped them defeat Shredder, after realizing that Bebop and Rocksteady caused their mutation. Muckman and Joe Eyeball were also going to be cured after Shredder had been defeated, but the two garbage mutants said that they were used to their mutant forms. He appeared in the 1987 TV series episode Muckman Messes Up.