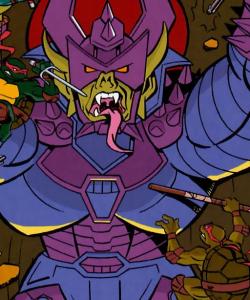 Galactose is a space vampire that was locked away in a coffin deep in space. He has the ability to tear a hole in dimensional fabric. He has appeared in theMirage Comics

Galactose is an obvious parody of Marvel Comics’ Galactus. Strangely, although his name is based on the word galactose as well as Galactus’ (galactose being one of the sugars found in milk), he eschews the reference to the cow characters seen in the issue by being a vampire.